Are Computers Things or Devices?

In his book Technology and the Character of Contemporary Life, Albert Borgmann makes a crucial distinction between "things" and "devices". A thing, he says, is an object which exercises a "commanding presence": it is to some extent an end in itself and it requires an active and skilled response from us. A device, in contrast, is disposable, in the sense that it's irrelevant that the object be this object, and hence is valued primarily for instrumental purposes. "A thing requires practice while a device invites consumption" (Power Failure, p. 31). Borgmann would call the piano in our living room a thing, and the entertainment center in our family room a device.

I would add to this that the same object can be a device or a thing depending on how you treat it. To take one example, sometime around 1930, my grandfather ordered a fly rod from Sears and Roebuck. He kept that same rod, fished with it, repaired it, and tended to it for nearly 80 years. He recently donated it to my father for his "museum", the (large) room in my parents' house which my Dad uses to celebrate the material culture of his youth. My Dad mounted it on a background of black velvet, and surrounded it with pictures from the 1940's featuring that same fly rod. 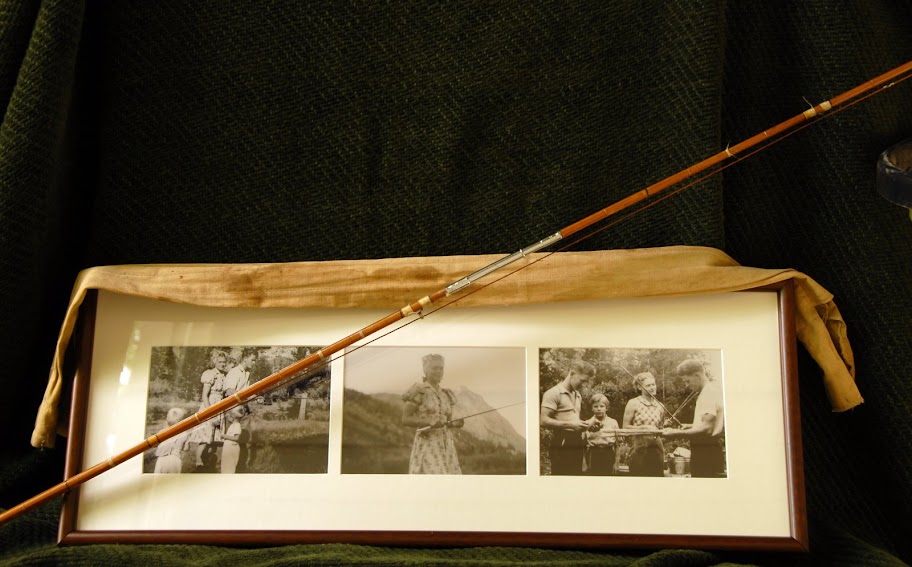 In contrast, when my brother and I wanted to go fishing, Keith had his assistant buy four or five fishing poles and some gear, and had them sent up to his cabin. When we arrived, we took the wrapping off a couple of them, strung them up, strapped them onto our four-wheelers and took off; when we returned, we threw the two we'd used back on the same shelf where the other two (still in their wrappers) were sitting, and have never looked at them again.

Clearly, my grandfather's fly rod was a thing, and my brother's fishing poles were devices. I suppose you could argue that my grandfather, in attaching such importance to his fly rod, was more materialistic than my brother and I, who clearly attached no particular importance to ours. If so, it's a sort of materialism that is higher and not lower, more ethical and not less, closer to the divine stewardship we are supposed to exercise over the world. As C. S. Lewis says, it's possible to be below certain temptations.

But I got to wondering where computers fit on this spectrum between things and devices.

Of course, there are many people for whom computers are simply devices. They use a computer because it lets them send and receive emails, or check Facebook, or update their blog. Their computer has no commanding presence, and only instrumental value.

But there are many other people who see their computer as something completely different – the sort of people referenced in this xkcd cartoon, for instance:

There are many people for whom computers (and associated technologies) call forth precisely the sort of active, learned, practiced response that Borgmann associates with things. The open source movement can succeed only because there are hundreds of thousands of people around the world who attach the same emotional value to their work on, say, the Linux kernel, as Yitzhak Perlman attaches to his Stradivarius. Some people, of course, create web sites only to make money, but many others do it out of a labor of love, for the sheer beauty of the thing (here, for instance). I don't know any programmers who write code for a living only because it's the easiest way for them to make money. Nearly all of them love the art of coding, read books about programming in their spare time, and engage in extensive arguments about the best way to architect a system. These debates are disparagingly termed "religious arguments", but I think the description is telling: programmers find a meaning and significance in their code that goes beyond its instrumental value.

The programmer, like the poet, works only slightly removed from pure thought-stuff. He builds his castles in the air, from air, creating by exertion of the imagination. Few media of creation are so flexible, so easy to polish and re-work, so readily capable of realizing grand conceptual structures . . . Yet the program construct, unlike the poet's words, is real in the sense that it moves and works, producing visible outputs separate from the construct itself. It prints results, draws pictures, produces sounds, moves arms. The magic of myth and legend has come true in our time. One types the correct incantation on a keyboard, and a display screen comes to life, showing things that never were nor could be.

The typical explanation for why programmers fall in love with computers is control: geeks like to code because it allows them to inhabit a world without contingency. There may be something to that, but I think there's something more going on as well. Nothing human is that one-sided, and coding is clearly a human activity. Going with Fred Brooks, I think programming is better understood as another exercise of the imago dei, an attempt at subcreation by creatures made in the image of a Creator.