Rained out on Labor Day (again)

We tried to go camping for Labor Day (again), but like last Labor Day, we got rained out, gave up and came back home early.  Still, we had a reasonably good time while we were there.

Our weekend started on Friday afternoon, when Caedmon and I drove to the Middle Fork Campground, ahead of everyone else, so that we could be sure to get our spot.

The next morning, Saturday, Caedmon and I tried our hand fishing, but didn't have any luck.  Probably would have done better with flies, but it's difficult enough to get a three-year old to handle a spinning rod without tangles and snags everywhere.  I'll leave the fly-fishing lessons for another day. 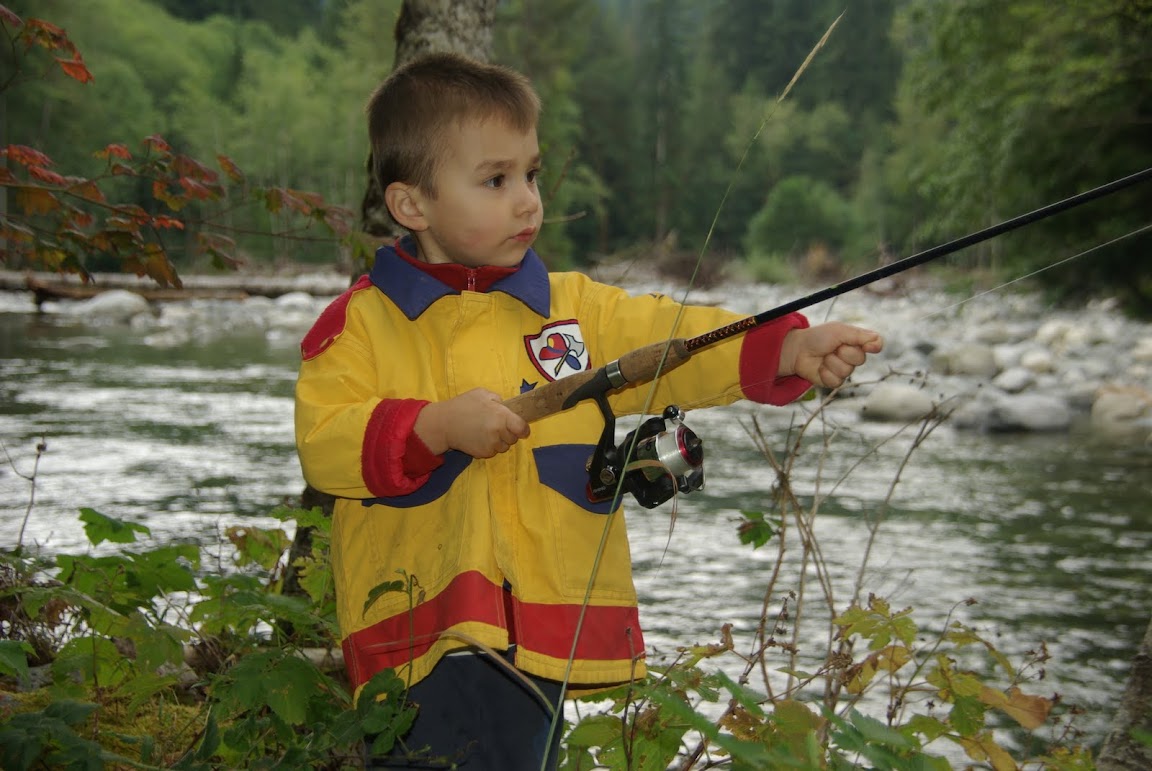 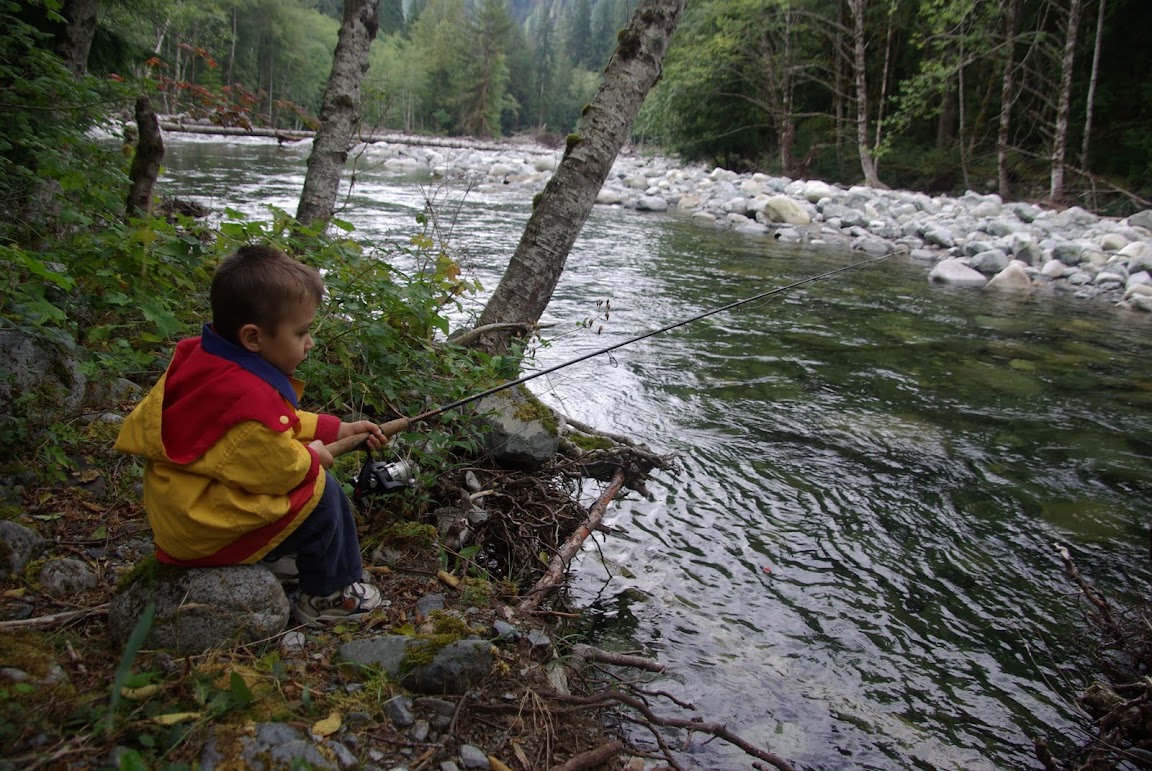 After fishing, but before lunch, Caedmon and I went on a hike that ended up being longer than we expected.  We got about a mile and a half out before finally turning around.  Caedmon did great, but was a little disappointed that we turned back before the end of the trail.  I explained to him that we needed to go back to camp so we could have some food, before we got all tired and grumpy.  He wanted to know why we might get tired and grumpy, so I said, "Well, it's our brain's way of telling us that we need to get more food."  A while later, when we were almost back to our campsite, I was carrying him on my shoulders, and I heard him whisper to himself, "It's all right, brain. You'll get some food in a couple minutes." 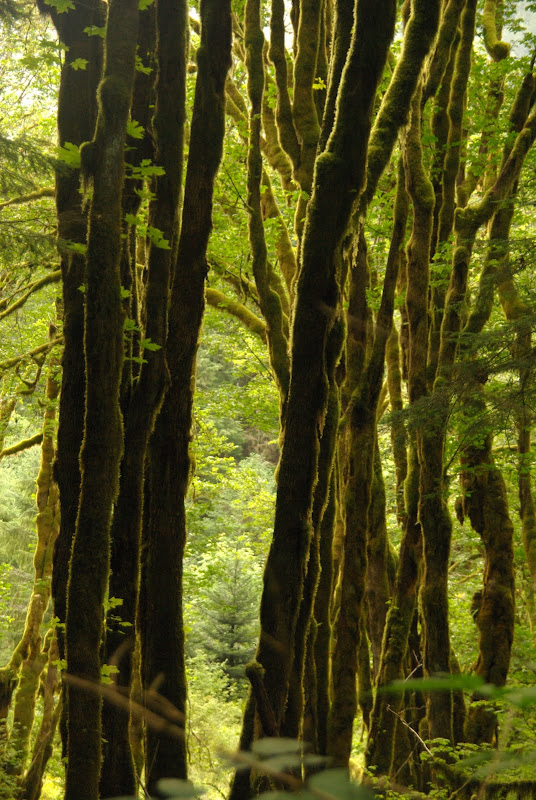 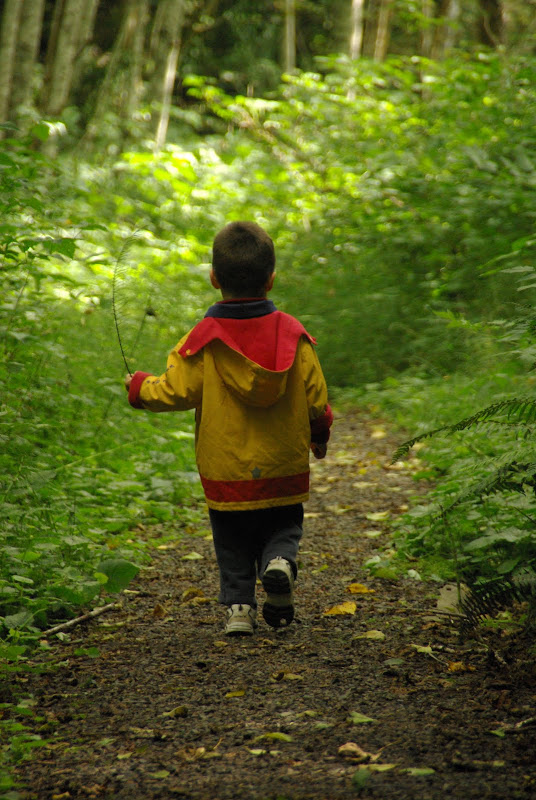 Later Saturday afternoon,  Galena, Brendan, Calista and Kirstin McGhee got there.  Kirstin's been helping Galena with the kids most of the summer, so she knows them very well, and when her boyfriend, Tony, decided to spend Labor Day weekend in Las Vegas, she asked if she could hang out with us.  That gave us the excuse we needed to try camping with three such small kids.  And she was very handy to have around -- you don't want young children outnumbering adults on a camping trip.

Brendan loved the ice-cold, freezing water.  Must help to have a layer of blubber for insulation. 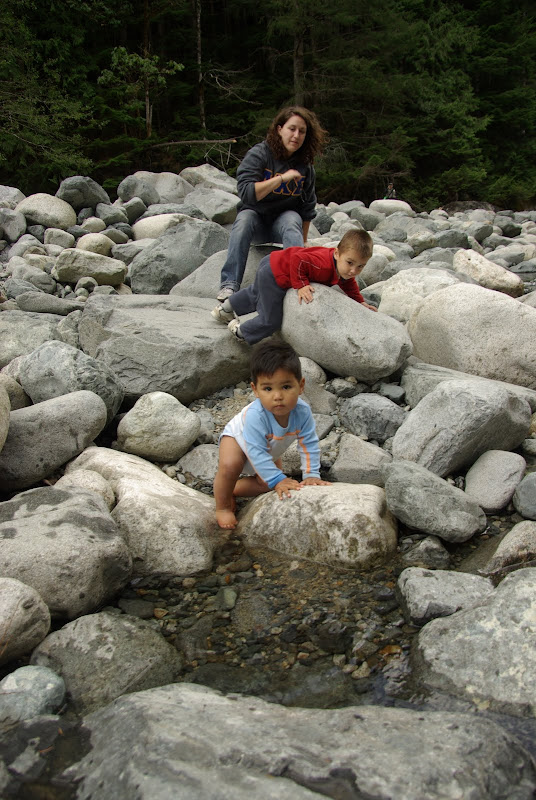 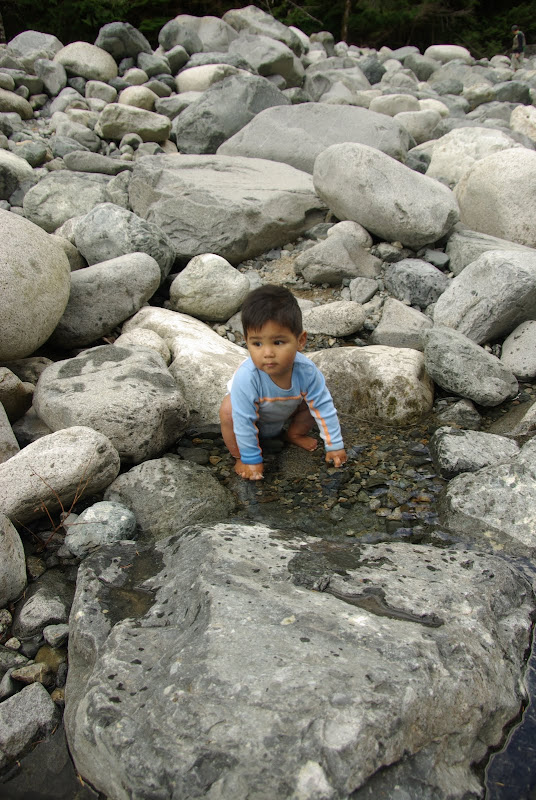 This was Calista's first camping trip, and she seemed a little stunned by it all. 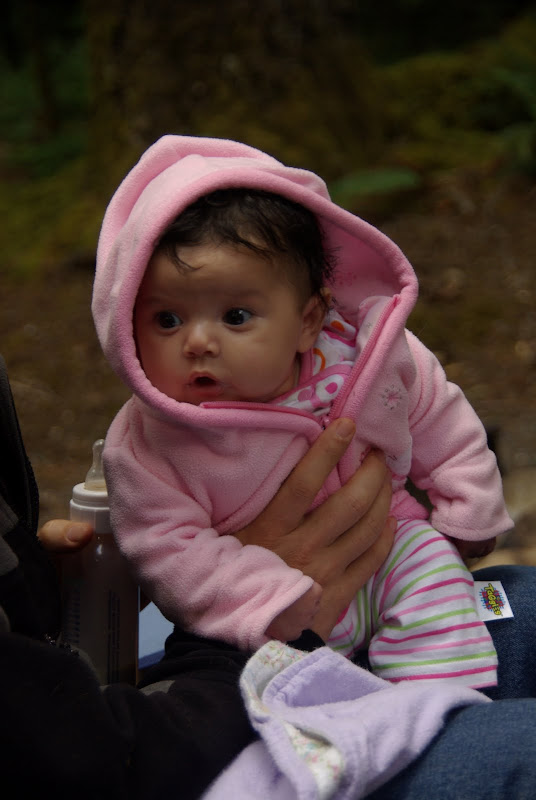 That evening, after dinner, we made s'mores, which were a substantial hit, not least because they gave Caedmon an excuse to wave a flaming torch around. 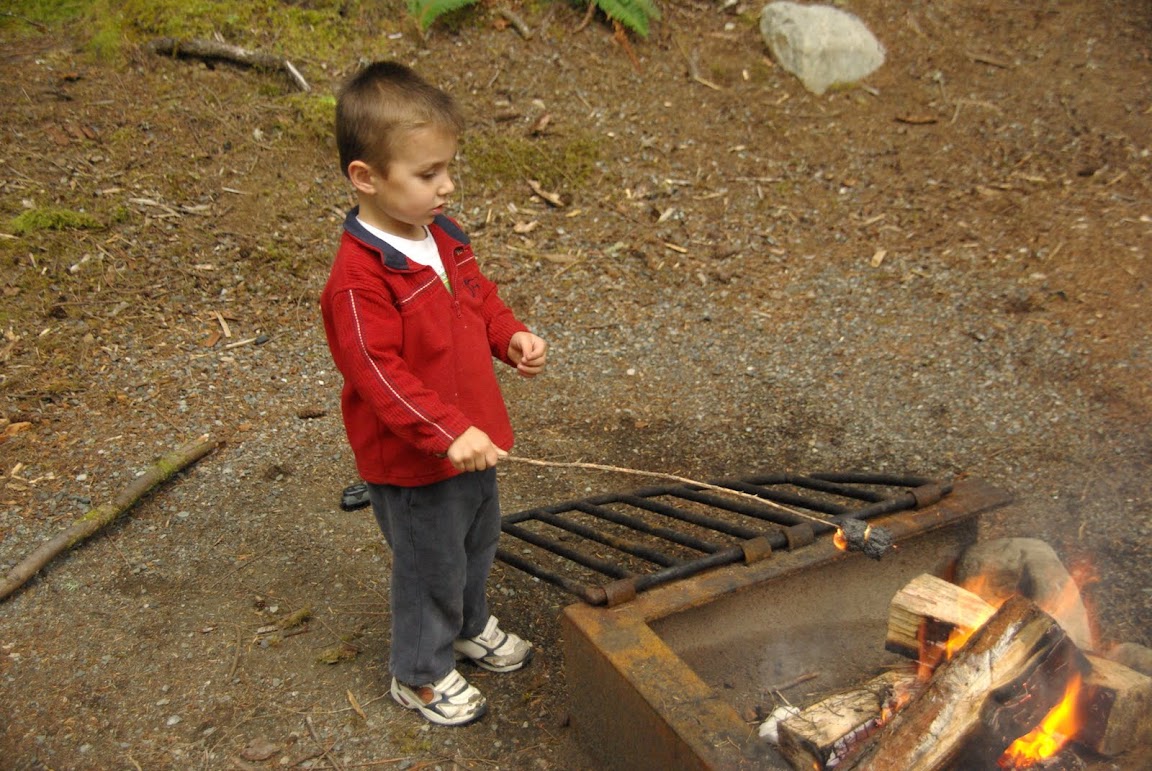 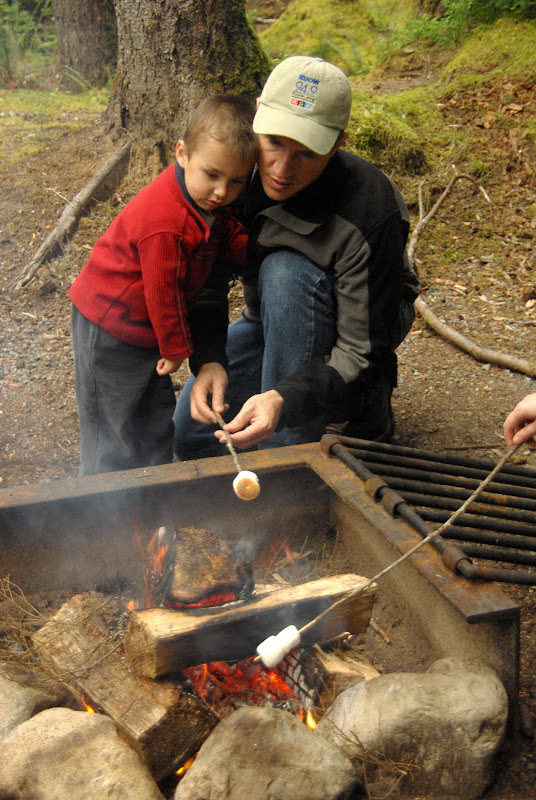 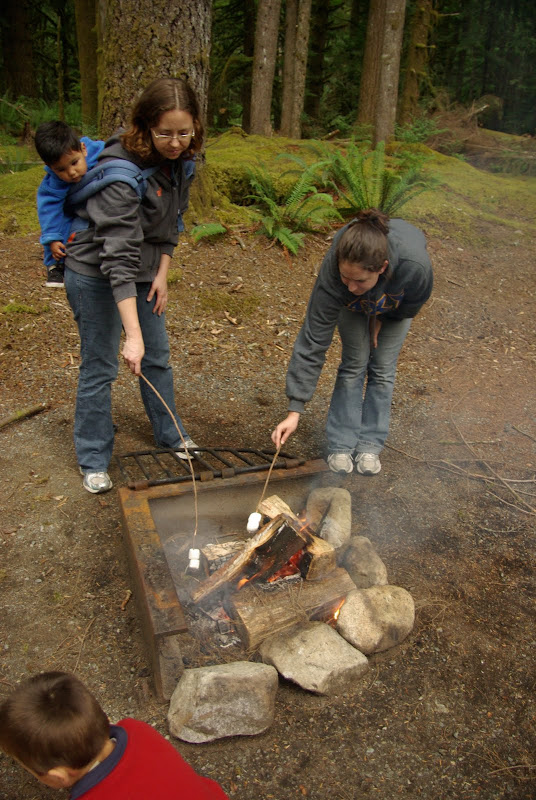 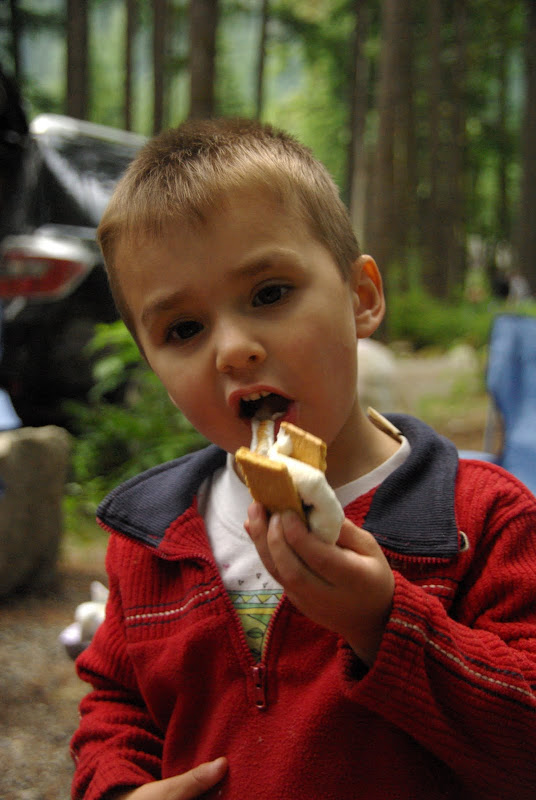 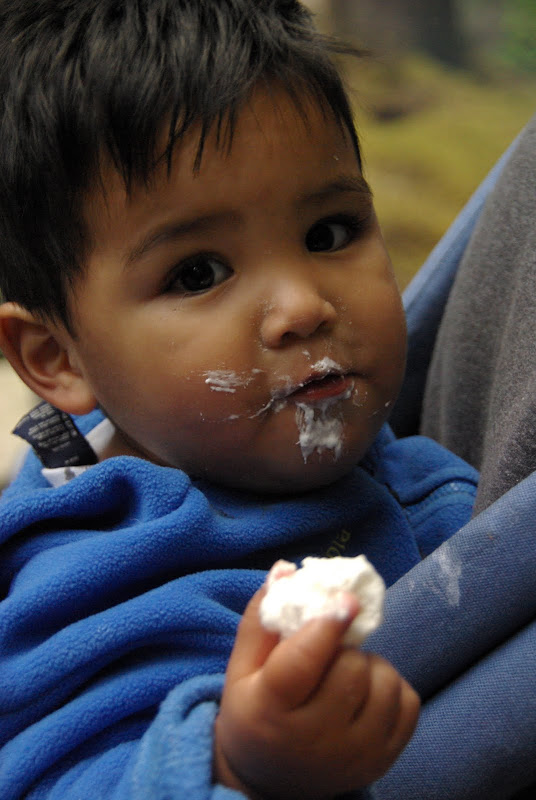 It started sprinkling just after we put the kids to bed, and by the time we were in bed ourselves, it was coming down pretty hard.  It rained all night, and it turns out that 3-season tents are really preferable to 2-season tents in situations like that.  I had Caedmon and Calista in my tent, and we were all dry, but Galena, Kirstin and Brendan were all pretty wet by the time morning rolled around.  So we made a quick breakfast, cleaned up as best we could in the rain, and headed home.  I like to think of it less as "giving up" than "staying married".