David Jang’s community has been having a terrible, horrible, no good, very bad week.

First there was the Guardian article which outlined the connections between David Jang and Newsweek, and then, in a fit of political correctness, tried to convince everyone – with daunting success – that Johnathan Davis’ opinions about gay reparative therapy were newsworthy.

This was followed, much more damningly, by a Mother Jones article which laid out some pretty solid reasons for being concerned about the cavalier attitude towards immigration and labor laws evinced by both IBTimes and Olivet University. And of course, these articles resulted in a great deal more chatter back and forth over the Interwebs, with responses ranging from thoughtful to inane and naive.

But the really bad news landed today. According to the Hudson Valley Reporter, Olivet University (or, I suppose more precisely, its management company, Olivet Management LLC) got hit with a $2.3MM fine from the Department of Labor for “exposing its employees to asbestos and lead during a renovation.” 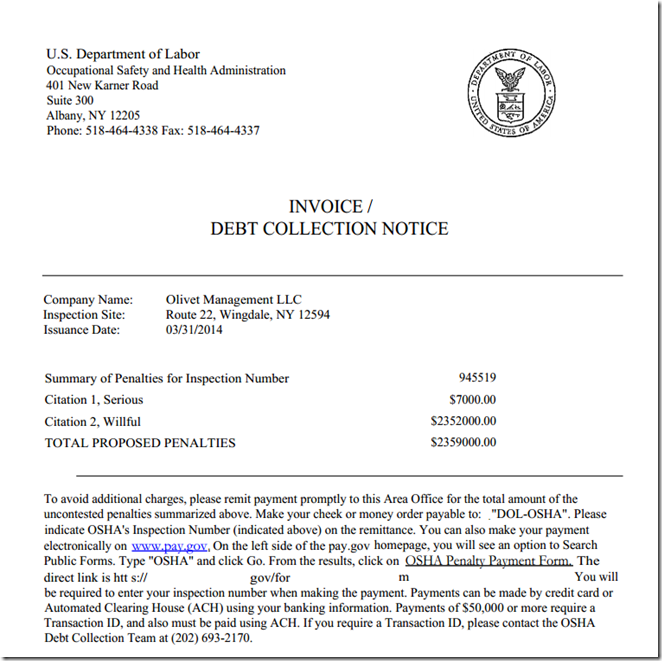 I have to imagine that Olivet is going to contest the fines – because from everything I’ve seen, Jang’s community tends to run their budgets pretty close to the red line, and only make it from month-to-month by depending heavily on donations from students and community members (and more troublingly, from community members’ families, who aren’t necessarily told the truth about how their money is going to be spent). Unless IBT and Newsweek are rolling in a lot more cash than you’d think online news publications are likely to throw off, it’s going to be difficult for Olivet to come up with the money to pay this fine.

This enforcement action also raises the interesting question of the precise relationship between Olivet Management, LLC, and Olivet University. For instance, if Olivet Management declares bankruptcy (which definitely seems within the realm of possibility) can the DOL go after Olivet University for the money? Some very expensive lawyers are probably coming up with some very expensive opinions on that topic right now.

If the concerns raised by the recent Mother Jones article have any merit (and I’ve seen independent evidence that suggests they do), this may not be the first time that David Jang’s community has played fast and loose with federal labor laws. Now that they have the attention of the Department of Labor, they may want to rethink that habit.