Some thoughts on blacktail hunting (from a total noob)

About three years ago, I bought my kids a couple of toy bows - some of those $30 jobs that you can find at any sporting goods store, which pull maybe 15-20 pounds, and shoot about as straight as Liberace. We couldn't hit anything with them, but it was fun plinking around. As a kid myself, I had borrowed the tiny wooden longbow my own Dad had as a kid, and loved it, but I think it came with maybe 1-2 arrows, and I quickly lost those. So this was my first chance to actually experience anything like archery.

After a year or two, I was still enjoying it enough that I wondered what it would be like to shoot a real bow - something dangerous enough to actually warrant the anxiety Galena had been lavishing on the toy bows. I knew that real archers actually sometimes hit what they were aiming at, and I was happy to blame my repeated failures in that regard on my equipment.

So after some research, and on a weekend when Galena wasn't paying too much attention, I found myself walking out of our local bow store with a new Hoyt PowerMax and all the fixings. 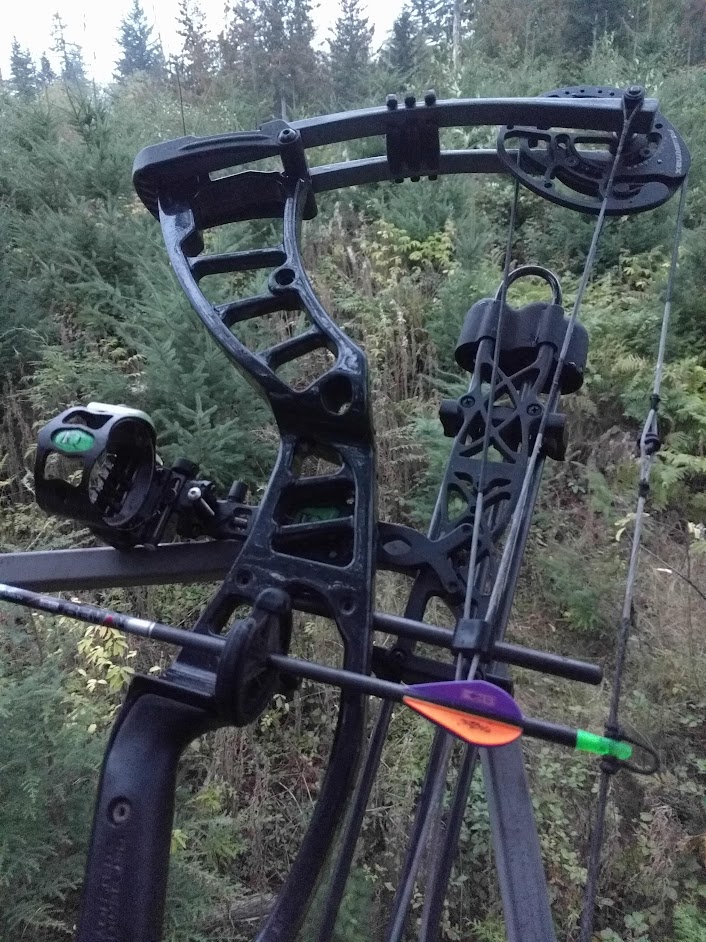 Not surprisingly, I found myself actually able to hit stuff. Not at all well, mind you - I was shooting something like 8" groupings at 20 yards - but way better than anything I'd been able to do with the kids' bows. And I loved the thunk that the arrows made sinking into a target at high speed. It was cool.


After a month or so of that, I started wanting to shoot at more than just targets in the backyard. Which got me thinking about hunting.

I was pushing fifty, and hadn't hunted since a family friend took me a couple times in high school. But I remembered the feeling of excitement and power that came from walking through the woods with a weapon in my hand. And I figured that if I was going to try for a mid-life crisis, this was about as innocent a pastime as Galena could ask for.

The first problem is that I really had no idea where to start. I was a complete newbie - I couldn't tell you the difference between a blacktail, a whitetail and a mulie, and had no idea which ones lived anywhere near me. None of my friends hunted, and none of the hunters in my extended family lived close enough. Just reading the Washington state hunting regulations was an exercise in frustration. But I started watching Youtube videos, reading hunting websites, and hanging out on hunting forums, and that got me hooked.

In one sense, those resources were invaluable. I had no idea, for instance, that if you shoot an animal with a bow, you're not supposed to jump up and run after it. I'd always thought that an animal shot with an arrow would act roughly the way a human in a movie does, and fall down with a dramatic thump. It wouldn't have crossed my mind to think that they would nearly always simply run away, like they'd never been hit. And I was a bit surprised at how seriously the hunters on the videos treated the wind. I had some vague theoretical notion that animals had a better sense of smell than humans, but I had never thought to pay attention to which way the wind was blowing.

In another sense, though, the resources weren't all that helpful, for several reasons. First, the vast majority of deer hunting resources are targeted towards whitetail hunters. I haven't yet had a chance to go after a whitetail, but after two seasons of hunting Columbian blacktails, I can tell you that they ain't nothing like their eastern cousins. I'll get into the details in later posts, but suffice to say that techniques which work well on whitetails are nearly irrelevant to the sort of hunting available in western Washington. Second, and this is just what you'd expect, the videos are nearly always about successful hunts. At best they'll mention the months of scouting and the fruitless weeks spent in a treestand, or even throw them into a montage, but that's not what they show. And that gives you a very different feel for what hunting feels like when you're actually doing it, especially in an area where deer don't travel in herds, spend nearly all their time in thick undergrowth, and are unlikely to ever be seen in significant numbers.

So I've been thinking that I'd like to throw up a few blog posts about my experiences as a total newcomer to the sport. It should be obvious that these are not going to be the authoritative pronouncements of an experienced hunter. (I've been hunting for one and a half seasons, haven't harvested anything bigger than a rabbit, and have taken a single shot at a deer - a spike - and missed clean. I'm in no position to be giving advice to anyone.) It's mostly a way for me to collect my own thoughts, and maybe help other newbie hunters who were in the same spot I was. And if you happen to be reading this, and can spot something I'm doing wrong or have totally missed - please, chime in!
Posted by Unknown at 6:42 AM