A grand unified theory of hunting

I mentioned in my last post that animals are much better at knowing where we are than we are at knowing where they are. But we can also extend that thought slightly, as it presents the primary dilemma associated with hunting.

All the different hunting techniques are just attempts to overcome this paradox.

The idea that you have to be moving to see deer is basically just math, though it's empirically verifiable as well. If you pick some random spot out in the woods, and sit there, you're not going to see many animals. You're much more likely to see a deer if you engage in some counter-intuitive behaviors, like driving your truck slowly along logging roads, or even better, riding your mountain bike.

The reason is that deer don't move much during the day, and when they do, it's slowly. During daylight hours, a blacktail might only walk a quarter mile. (It'll move further at night, but that doesn't help a hunter.) If you can see that deer from 50 yards, the territory from which it's visible that day will amount to about 10 acres (440 yards * 100 yards = 44,000 square yards = 9.1 acres). In other words, there's only a 10 acre "encounter zone" with a randomly positioned stationary hunter, and your chances of your location intersecting with the deer's encounter zone is relatively small.

But if you're out mountain biking, and you cover 10 miles with the same 50 yards of visibility, you'll have put 330 acres of territory within your purview, so you've got a much larger encounter zone. Mathematically, there's simply a better chance that a deer will be in those 330 acres than that a stationary hunter's location will fall within the 10 acres from which a traveling deer can be seen. But because you're moving, and because deer are better at these things than we are, any deer will be able to tell you're passing by from probably 100 yards away - so your warning zone will probably extend to over 600 acres. 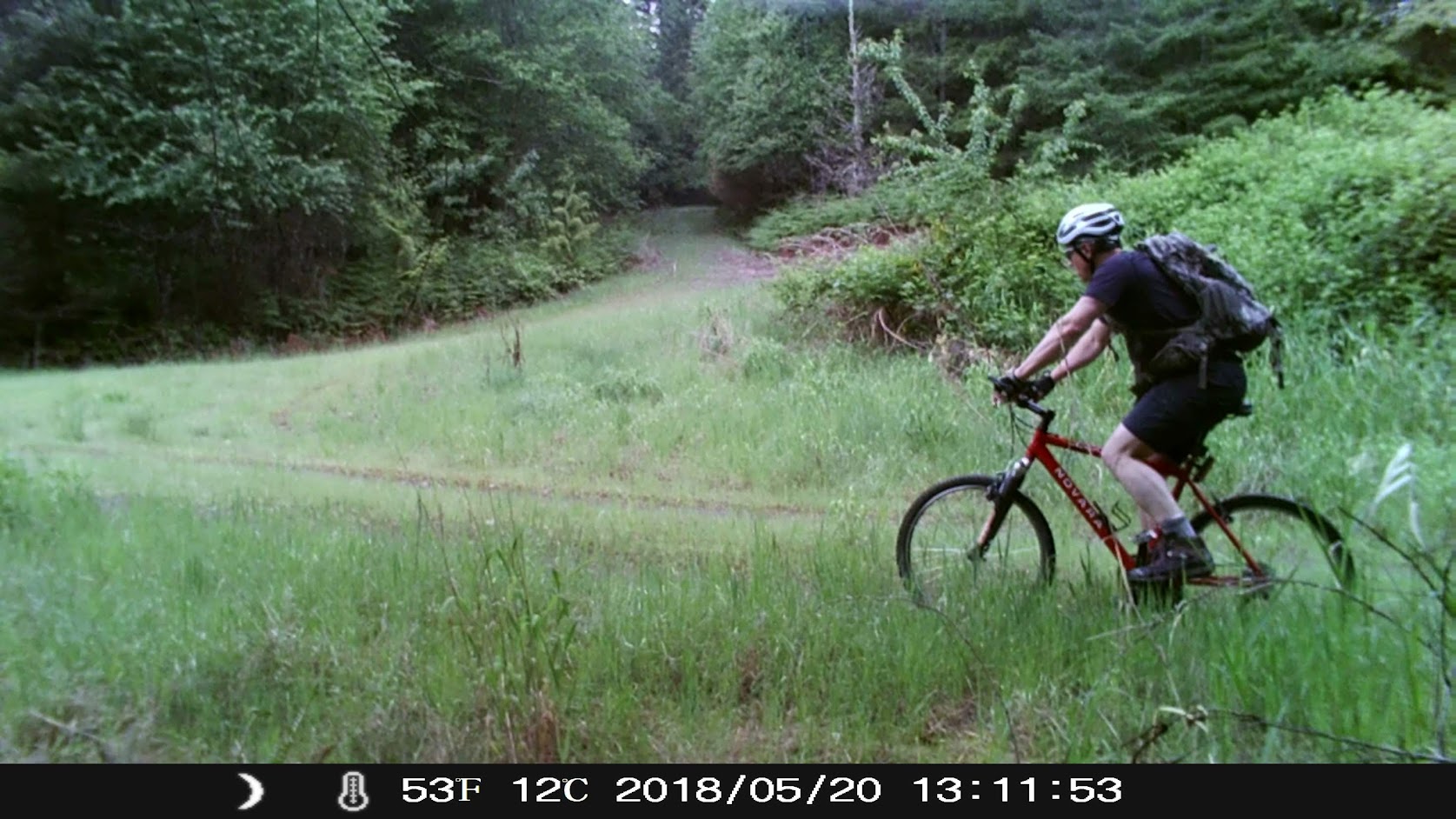 This is also why so many hunters are primarily road hunters. You really do see more animals that way. Over the last two seasons, I've  laid eyes on 150 or so deer. Probably 100 of those were from a moving vehicle of some sort (auto, truck or bike), and maybe 40 were from when I was walking or still hunting. I've only seen maybe a dozen deer when I was setup somewhere, silent and quiet - despite having spent much of my time in the woods completely motionless.


The problem is that when you're moving, the deer also see you. This goes back to how animals (including the two-legged variety) interpret their visual field. Long ago, evolution figured out that things which move are more relevant to our survival than things which don't, so our brains are hard-wired to pay attention to movement. When you're moving, you scatter more scent around; and you make more noise. So yeah, you see the deer, but all you see of them is black tails and white butts, disappearing into the brush.

So what do you do? Well, like I said, every hunting technique is just an attempt to get around the "10 acre problem". But each of them in turn introduces its own set of complications.

Still hunting - walking very slowly and quietly - is an attempt to minimize your warning zone by keeping signs of your presence below the deer's "excitement threshold", while still covering enough territory to increase your encounter zone to something reasonable. This is probably my favorite sort of hunting, because you're doing something that requires skill and concentration, and your view is constantly changing.

The downside is that a deer's excitement threshold is quite low. It's hard - harder than you would think - to keep a deer from seeing you if you're not absolutely motionless. Sound, scent and sight are all against you. I can only think of a few times, while still-hunting, that I was able to spot deer before they knew I was there, and it's no accident that they were all were in relatively arid southern Oregon. The forest we were hunting was open enough that I could see further than the deer could hear, and when the wind was right, I sometimes got lucky enough to notice the deer first. (Most of the time, of course, by the time I noticed them, they were either staring straight at me, or were disappearing through the tree trunks.) I've never managed to accomplish this in the much denser and louder undergrowth of western Washington. If you want to be quiet anywhere west of the Cascades, you have to be on a road or well-traveled trail - which is usually open enough that the deer are going to spot your unscreened movements well before you take any account of their screened, still, grey bodies. Or you end up traveling so slowly that you don't really open up your encounter zone very much. There's probably some sweet spot, but I haven't found it yet.

Stand hunting - positioning yourself in a tree stand or a ground blind and staying put - is an attempt to put yourself within the right 10 acres. You make your encounter zone huge during the scouting season, letting you make an educated guess as to where the deer are likely to be come hunting season. Your encounter zone while actually hunting is tiny, but assuming you remain still, quiet and motionless, your warning zone should be even tinier. (It will extend just a few yards upwind, and a quarter mile or so downwind.)


The main downside to this approach, if you're hunting western Washington blacktail, is that they're hippy deer. They go where they want, when they want, with no pattern I've been able to discern. I've been told you can set your clock with whitetails - if you see them nibbling a particular patch of alfalfa at 7:00 am today, you've got a pretty good chance of find them there at 7:00 am tomorrow. No self-respecting blacktail would ever let themselves get tied down to a schedule like that. They go anywhere and everywhere. It's not uncommon for a well-marked trail to get used maybe a couple times a week. That's a lot of time to be sitting in a tree stand.

Spot-and-stalk hunting - trying to spot animals from a distance and then sneak up on them - is an attempt to increase your encounter zone via binoculars and careful positioning. Once you've spotted an animal and know where it is, you can focus your movements, and remain careful enough during your stalk to (help) ensure that the animal stays outside your warning zone.

The main downside to this approach is, "Have you ever been in western Washington?" This is what it looks like: 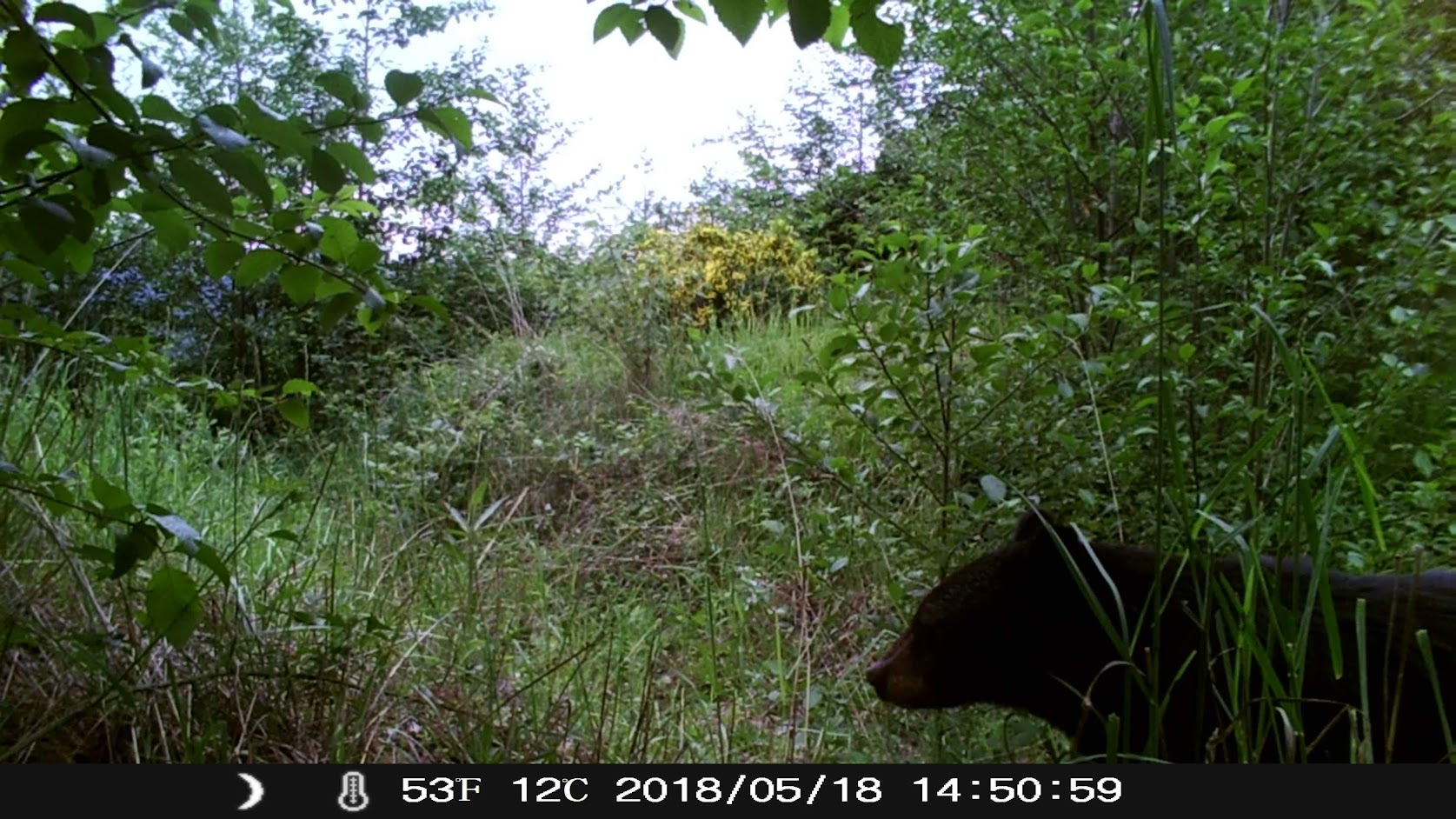 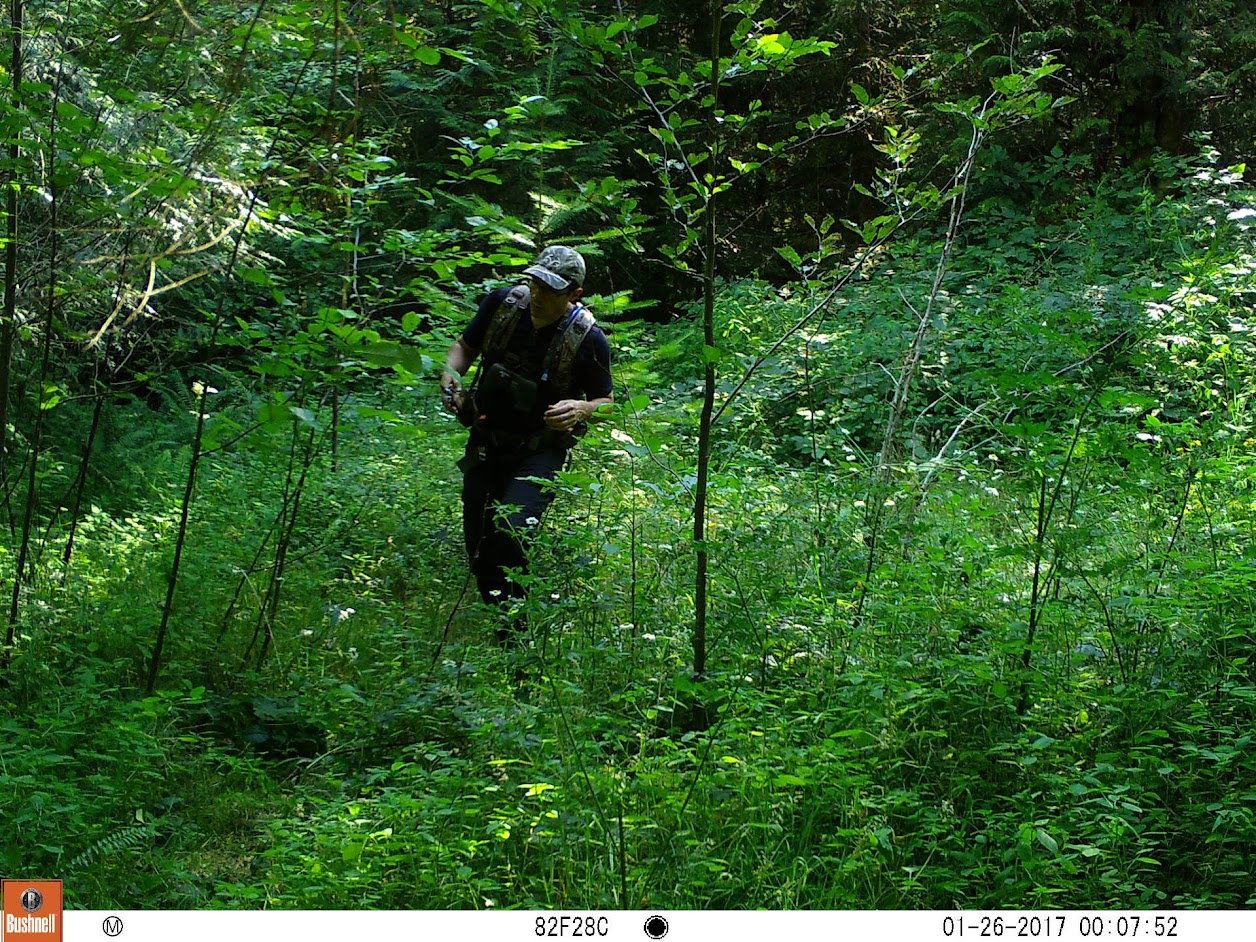 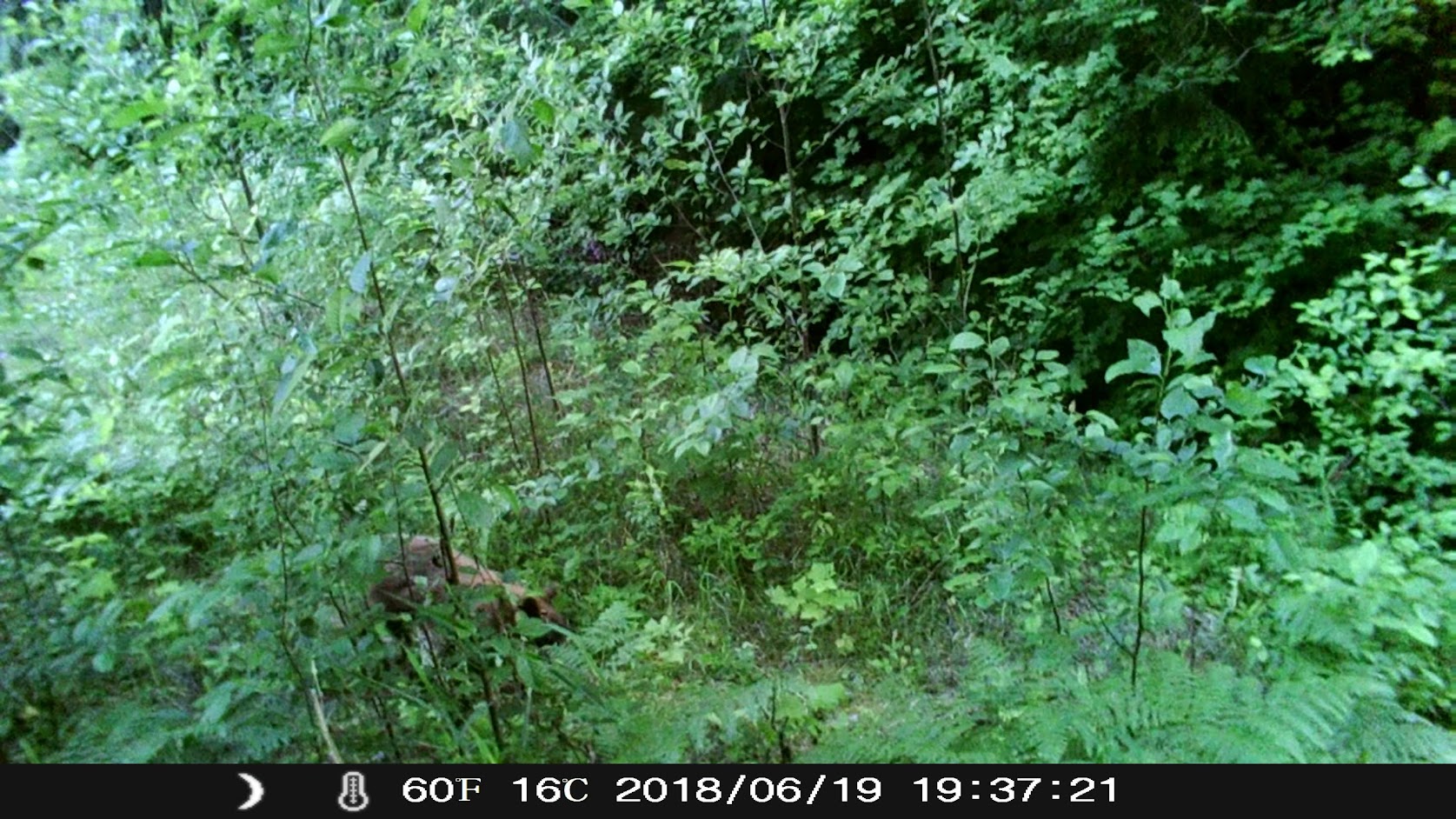 Yeah, good luck spotting and stalking with that.

Most deer will still be hidden, but you've got a fighting chance. In most wild places in western Washington, you're gonna be lucky if you can see that much of the land around you at 50 yards. Some places, it's gonna be 5. There are locations where maybe you can try it - big, recent clearcuts - but you're restricted to glassing the edges of the cuts, which is pretty limiting. I've never seen a western Washington blacktail in a clearcut open enough to glass from a distance.

Road hunting basically says, "Screw it, I'm gonna make both my encounter and my warning zones so huge that if I get lucky, a deer might get confused and let me have a shot." I have a feeling that when deer hear a truck or a mountain bike coming down a logging road, or even a noisy hiker on a trail, they often conclude, "Nothing making that much noise can possibly be dangerous." Or maybe it takes them 10 seconds to make up their mind - but by that time, you're traveling fast enough that you've moved within the encounter zone.

The biggest downside to moving quickly is that the deer are always going to know you're there, and you're only sometimes going to know that they are. Deer hide really well - more on that in a future post - and in a western Washington forest, they're almost invisible until they move. If you're moving quickly, you're unlikely to see a screened, motionless deer. (Hell, they can be hard enough to see when you know they're there, and you've been staring at the spot for five minutes.) When the deer finally does move, it'll be heading quickly towards brush or other landscape features that it knows will screen its movements, and it's unlikely you'll get a shot off in time.

I should note that if you're in a vehicle and see some deer beside the road, if you keep going and don't slow down, the deer will often let you pass without moving. But if you stop, or try to get out and off the road, the deer will be gone in seconds. The only exception to this that I've seen is if the deer is a yearling without its mother. Then it'll sometimes remain still. The one actual shot I've taken at a deer - and blew - was of this sort.

Oddly enough, if you're moving slowly, but with just enough movement or sound that the deer can tell you're coming, they're more likely to spook than if you're moving quickly and noisily. I once watched my kids trying to stalk some deer at a campground. So long as the deer knew where they were, my kids could get fairly close: the deer didn't really care about all the noise and commotion. But when my kids tried to circle back some distance and approach from behind, the deer quickly locked in on the sounds of unknown origin, and bolted. Deer really don't like anything that gives the impression of trying to sneak up on them.

So what do you?

I don't know yet. Nothing I've tried has worked. Yet. But I've learned a lot about the details, and I'll have some comments on what precisely I've picked up in future posts.
Posted by Unknown at 4:08 PM